I have learned a lot by reading the API docs at Ruby on Rails Active Record Transaction.

Transactions are protective blocks where SQL statements are only permanent if they can all succeed as one atomic action.

The classic example is a transfer between two accounts where you can only have a deposit if the withdrawal succeeded and vice versa.

Transactions enforce the integrity of the database and guard the data against program errors or database break-downs. So, basically you should use transaction blocks whenever you have numerous statements that must be executed together or not at all.

So, while running the withdrawal method of the user model, if an error comes then the next method of user deposit is not called.

Similarly, if the withdrawal of David is done, but an error comes in the deposit method of Mary then changes occurred during David’s withdrawal method will be rollback, so the money will not be transferred at all.

I normally use Active Record Transactions when I am about to duplicate an instance that also has a relation of has_many with other model instances.

after_commit is called when the transaction is completed successfully.

after_rollback is called when the transaction is unsuccessful.

Models are children of Application Record:

Transactions are per-database connection, not per-model.

As the transaction is the part of ActiveRecord::Base, so all models can access transactions using class or instance. For Example, below are all valid snippets:

A transaction acts on a single database connection. If you have multiple class-specific databases, the transaction will not protect interaction among them. One workaround is to begin a transaction on each class whose models you alter:

This is a poor solution, but fully distributed transactions are beyond the scope of Active Record. 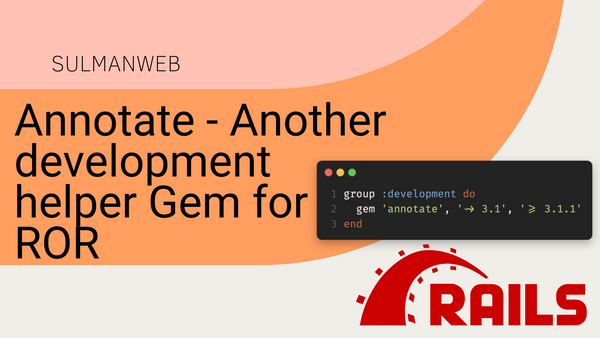 Annotate gem helps in adding routes as comments in rout file and table schema in model.